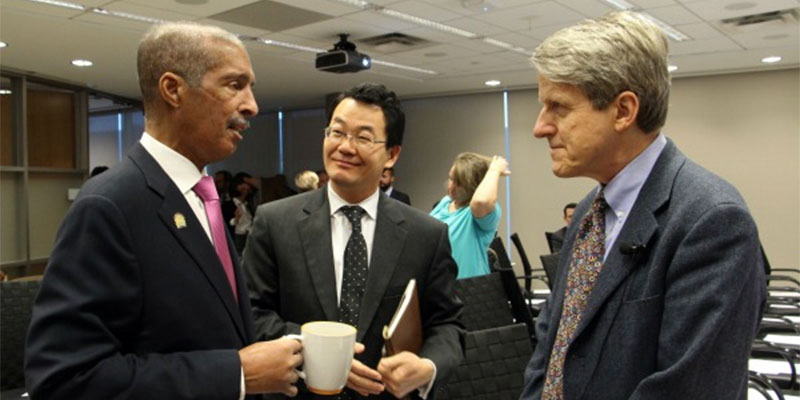 The homeownership rate in America continues to hover around a 50-year low, but experts gathered for an event in the Washington, D.C. offices of the National Association of Realtors® said today that there are real-world opportunities to turn that trend around.

“It’s tough out there right now for buyers, especially in many of the red-hot markets around the country where competition is the fiercest,” said National Association of Realtors® President William E. Brown, a Realtor® from Alamo, California and founder of Investment Properties. “Thankfully, we know there are ways to help consumers. Addressing the growing student loan burden, widening the credit box for strong buyers, building more homes that meet the demand of lower and middle-income buyers – these are among the many steps we can take to clear the pathway to homeownership.”

The event on housing and homeownership was headlined by Nobel Prize Winning economist Dr. Robert Shiller, who offered his take on the housing market’s history and possible future. He looked at trends in oil prices, building costs, and other factors that play a role in driving demand, but told the packed audience that public sentiment clearly plays its own role in driving the housing market.

Looking at the recovery since the Great Recession, Shiller said “it’s kind of obvious that home prices have been rising at a good clip… But it’s not because of building costs, population trends, or interests rates.” Instead, Shiller said “it’s the changing narrative and the stories that go along with it.”

The noted economists honed in on the homeownership rate and its importance to the broader economy. Yun in particular talked about challenges to homeownership including rising rents and student debt loads, noting that the difficulty in purchasing a home has led to a growing wealth inequality between generations.

“There is a tremendous wealth buildup among people who are 65 and older,” Yun said. “They have essentially paid off their mortgages.” For the younger generation, including those under 35 years of age, Yun said “they feel that they are being left out.” Yun added that while the pendulum swung too far towards loose underwriting before the Great Recession, it has since swung in the other direction, leading to what he described as “overly strict underwriting standards” that can put homeownership out of reach for even strong buyers in some circumstances.

On the question of whether the homeownership rate will rise, Bovino likewise noted that “we do expect to see some improvement, but it’s going to take some time. Rents are increasing and interest rates are low, so there is an interest in getting back into homeownership.”

NAR reported in November that the median existing-home price for all housing types in October was up 6.0 percent from the previous year, marking the 56th consecutive month of year-over-year gains. This finding coincided with a 4.3 percent year-over-year decline in inventory levels, a consistent challenge for buyers looking to purchase a home, particularly in competitive markets.

The audience also had the opportunity to hear from Congressmen Frank Lucas (R-Okla.) and Brad Sherman (D-Calif.), both Members of the House Financial Services Committee. In a panel moderated by Politico financial services reporter Lorraine Woellert, the Congressmen discussed the likelihood that significant reforms to tax policy may come before Congress in 2017, agreeing that eliminating the mortgage interest deduction would likely meet strong public opposition.

Brown thanked participants for their expertise, adding that as President of NAR he is committed to keeping housing at the front of the agenda.

“I’m pleased we could highlight these issues with today’s event and reiterate the importance of protecting and defending incentives for homeownership and real estate investment,” said Brown. “I look forward to continuing this good work throughout my tenure as president of NAR.”

The National Association of Realtors®, “The Voice for Real Estate,” is America’s largest trade association, representing 1.1 million members involved in all aspects of the residential and commercial real estate industries.