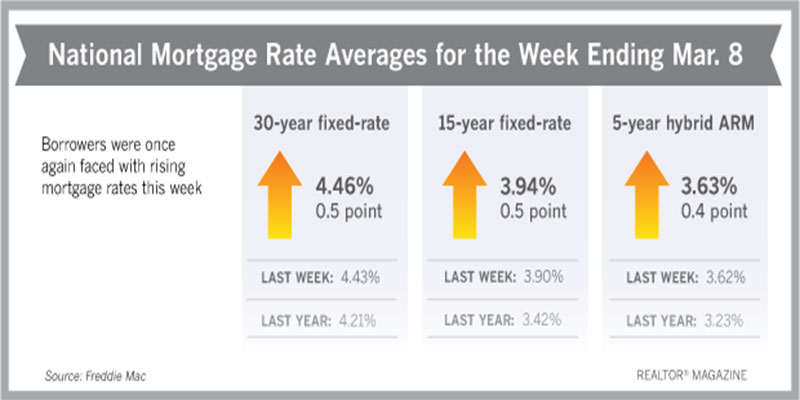 Borrowers were once again faced with rising mortgage rates this week. The 30-year fixed-rate
mortgage continues to be at its highest average in four years.

“The 10-year Treasury yield has been bouncing around in a narrow 15 basis point range for the
last month,” explains Len Kiefer, Freddie Mac’s chief economist. “While the yield on the 10-year
Treasury is currently below the high of 2.95 percent reached two weeks ago, mortgage rates are
up for the ninth consecutive week. The U.S. weekly average 30-year fixed mortgage rate rose 3
basis points to 4.46 percent in this week’s survey, its highest level since January 2014.”

Lawrence Yun commented this morning on the likely impact of the surprising job numbers on
mortgages.

“The strong job growth assures at least three interest rate hikes by the Federal Reserve in 2018.
Because of the low unemployment rate, further normalization in monetary policy should be
expected in 2019 as well, meaning another three or four rate hikes next year. Mortgage rates
will therefore rise and rise—that in itself hurts housing affordability,” Yun said. “But factors that
can help with affordability are more income to households (possibly a second income earner
getting a job) and if home prices can finally moderate. For slower home price growth, more home construction is needed. Job openings in the construction industry remain at historic highs. It is now a matter of providing necessary skills to go into the industry.”