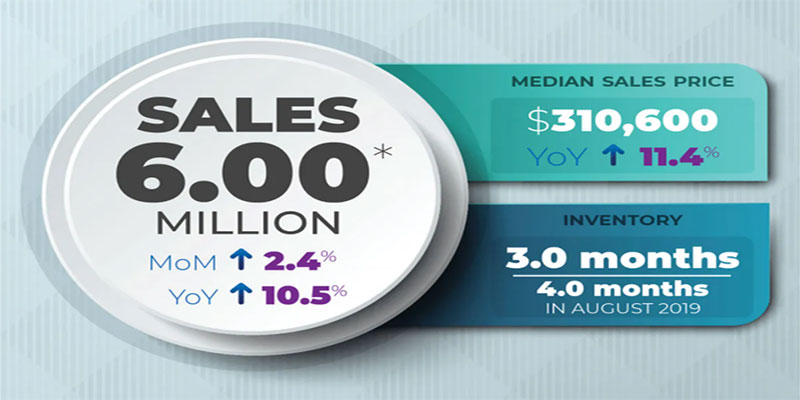 Home sales climbed in August to the likes of the 2006 housing boom days, despite the COVID-19 pandemic. Existing-home sales in each of the four major regions of the U.S. saw month-over-month and annual growth, the National Association of REALTORS® reported on Tuesday. The Northeast saw the largest monthly improvement in home sales.

Housing inventories continue to remain tight, putting upward pressure on home prices. Existing-home prices for all housing types in August climbed 11.4% compared to a year ago, reaching a median of $310,600. Prices rose in every region of the U.S. last month.

“Home sales continue to amaze, and there are plenty of buyers in the pipeline ready to enter the market,” says Lawrence Yun, NAR’s chief economist. “Further gains in sales are likely for the remainder of the year, with mortgage rates hovering around 3% and with continued job recovery.”

This marks three consecutive months of gains in home sales. Total existing-home sales—completed transactions that include single-family homes, townhomes, condos, and co-ops—increased 2.4% in August compared to July, reaching a seasonally adjusted annual rate of 6 million in August. Sales are up 10.5% from a year ago.

Shortages of homes for sale have proven problematic in the housing industry over the last few years, but have grown even worse in recent months. “Housing demand is robust but supply is not, and this imbalance will inevitably harm affordability and hinder ownership opportunities,” Yun says. “To assure broad gains in homeownership, more new homes need to be constructed.”

However, a surge in lumber prices and the shortage of lumber caused by the California wildfires are pressing on the new-home industry, Yun says. “Over recent months, we have seen lumber prices surge dramatically,” Yun says. “This has already led to an increase in the cost of multifamily housing and an even higher increase for single-family homes.”

At the end of August, the National Association of Home Builders reported a spike in softwood lumber prices was prompting an average price increase of about $14,116 since April 17.

Here’s a closer look at housing indicators from August, according to NAR’s latest report:

Median home prices increased at a double-digit pace in each of the four major regions in August compared to a year ago. Here’s how existing-home sales fared across the country last month: